I’m sitting here, outside church, reading and enjoying the sun & heat …with Christmas carols playing from the childcare centre… yes, it’s a totally random feeling... to me, sun, summer & Christmas doesn’t really match, specially not in September! It just feels all wrong!

Was just reading about Abraham, and suddenly I understood how totally human that man was! He failed so badly on several occasions, still, the Bible describes him as the father of our faith! And as I look at his life, I realize that he was just a human like all of us, like me. Doing his walk, trying to understand what God asked of him and do it. And several times he could succeed greatly in doing so, for in the next moment to turn around and do something so totally wrong. Like, seriously, who lies and says his wife is his sister just to save himself!?!?

And I understand that he was just learning to walk with God, learning to trust, learning to obey no matter what. And despite all of his mistakes, God used him greatly! That’s grace!

Then I realize, if God used him, despite his failures, He would surely be able to use me as well! Not because I’m any better or worse than Abraham was, coz I really don’t think I am! But that’s just it, it’s not what I do or don’t, it’s all Gods grace! So, no matter how many times I fail, or how many times I get it right, all He wants is my heart to be willing. So when I fail, I can rise again, put it all behind me, and start walking again. And when I get it right, I can thank God and say ‘it’s all because of Him!’ and keep walking!
Posted by maria at 03:53 6 comments:

After more than one and a half year in this city, I figured it was about time to go to Blue Mountains... yes... i've been here for ages, but still haven't been there... So a couple of weeks ago (just took forever to get the photos on here.. don't know how many times i've almost uploaded them all, just to somehow delete them before i got to save...) Kristin, Charis and I jumped on the train and went up there. Took us probably over 2 hours to get there, but as we were getting close, I soo didn't regret it. Was truly beautiful up there. Since none of us really know our way around there, we just did a simple hike along the edge of the cliffs to see some of the main attractions like the three sisters. Didn't realise how much i've missed the mountains till i got here. Not that it's anything like the mountains back home, but truly stunning anyways! So cool to see out over this massive area all covered with trees, don't have anything like that back home! As soon as we got off the train I could just feel the clear air, was soo refreshing! Getting out of the city, away from all the noise and busyness... I soo needed this... Think i have to go back sometime. This area is so massive, and there's so much cool things to see, think you can spend days hiking and still don't see all there is... But would like to go with someone that knows what they're doing though... think it would be easy to get lost if not...

We had an amazing day, just enjoying the nature, don't get to do that too much around here... 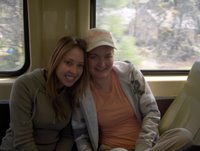 Charis and I on the train... 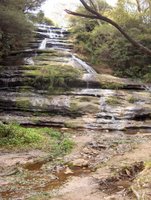 How beautiful is this!!! 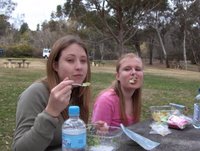 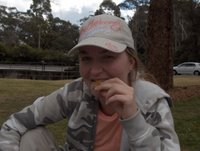 Brow cheese... oh yes... nothing like some norwegian food to give you energy for the rest of the day... lol... 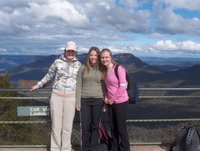 All three of us at one of the MANY view points we passed along the way... 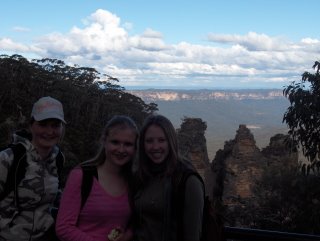 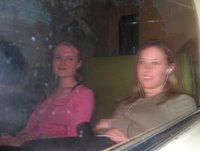 Me playing with my camera on the train back... taking pictures of the reflection in the window... Kristin and Charis realised they just had to be ready at any moment...

maria
my little corner.. with my random thinker-head notes posted once in a while... hopefully, someone will get something useful out of my thinking.. :)